Molecular typing using repetitive sequenced-based PCR (rep-PCR) and hsp60 sequencing were applied to a collection of diverse Enterobacter cloacae complex isolates. To determine the most practical method for reference laboratories, we analyzed 71E. cloacae complex isolates from sporadic and outbreak occurrences originating from 4 geographic areas. While rep-PCR was more discriminating, hsp60 sequencing provided a broader and a more objective geographical tracking method similar to multilocus sequence typing (MLST). In addition, we suggest that MLST may have higher discriminative power compared to hsp60 sequencing, although rep-PCR remains the most discriminative method for local outbreak investigations. In addition, rep-PCR can be an effective and inexpensive method for local outbreak investigation.

The goal of molecular typing methods is to determine how closely bacterial strains are related. Typing methods can also help to determine the source of infection, trace transmission of healthcare pathogens, and to categorize strains with virulent behavior or decreased antimicrobial susceptibility [1]. An informative typing method must be able to differentiate between organisms with small genetic differences while having acceptable reproducibility, ease of performance, short turn-around time, and ease of interpretation [2]. In addition, the most useful typing method should be able to determine the extent of genetic differences encountered and help infer if evolution can be deduced from those differences.

The reproducibility of rep-PCR has been established for a wide range of pathogens, including Klebsiella pneumoniae [10], Escherichia coli [11] Clostridium difficile [12], and Enterobacter cloacae complex [4]. More recently, rep-PCR has been compared favorably to PFGE [4]. MLST, considered the “gold standard” for molecular typing of many species, has an unproven scheme for the discrimination of E. cloacae complex isolates [6]. MLST involves sequencing a DNA segment within 7 housekeeping genes, of which hsp60 is not included. In comparison, hsp60 sequencing possesses the advantage of being a single gene, overcoming the cost and labor required to perform MLST. In developing hsp60 sequencing typing, Hoffman and Roggenkamp reported 12 clusters and 1 sequence crowd based on sequence divergences when describing the E. cloacae nomenspecies [5]. In this report, we compare hsp60 typing of Enterobacter cloacae complex to rep-PCR using a geographically diverse collection in order to gain insight regarding the most practical method to use in reference laboratories.

Strains: Enterobacter cloacae complex clinical isolates from a variety of sources (blood, urine, and sputum) were obtained from an outbreak in Fargo, ND (23); a pediatric hospital in Chicago, IL (21); an outbreak from Detroit, MI (8); and from Colombia in South America (20). Isolates were collected both during outbreaks and from sporadic cases. Species identification was confirmed with Vitek MS MALDI-TOF (RAB Laboratory).

hsp60 sequencing: Amplification of the hsp60 gene was accomplished using previously described primers and conditions [5] using DNA isolated by heat lysis. DNA sequencing was performed at a commercial laboratory (MCLAB) and assembled with the Lasergene Software suite (DNASTAR) Seqman package. Pairwise distance was calculated via the Clustal W method and a cladogram was generated using Megalign. We inspected the cladogram for hsp60 sequencing groups and then verified our findings using DNA alignment. Isolates were different if they had a single base difference at any position.

Data Analysis: The rep-PCR system was divided into 2 sub-groups. In the first sub-group we considered that all isolates with a similarity > 95% (according to the Kullback-Leibler method) belonged to the same strain. For the second group, we visually inspected the band pattern from isolates with > 95% similarity and classified an isolate as different if we could identify at least 1 band difference.

Results from the 3 typing systems were compared using the Simpson’s diversity index (SDI) to assess each method’s ability to find differences between the isolates [15]. The Adjusted Wallace coefficient was used to determine if the methods agreed with each other [16].

Our results further establish that rep-PCR can discriminate E. cloacae complex strains from diverse geographic origins. When compared to hsp60 sequencing, we observed that rep-PCR shows a higher discriminatory ability. The lower discriminatory ability of hsp60 sequencing as revealed by the SDI (0.98 vs 0.85) is expected given that this is a highly-conserved gene. In contrast, rep-PCR amplifies repetitive areas distributed around the bacterial genome that can change because of chromosomal rearrangements. Despite this, compared to rep-PCR, hsp60 sequencing was able to discriminate a comparable number of isolates. While most of the isolates acquired from patients belonged to clusters I, IV, VI, VIII, and XI of the Hoffman and Roggenkamp genetic clusters [5], we show that hsp60 sequencing is able to provide greater resolution in differentiating isolates affecting humans than what can be provided only by hsp60 cluster designation (Figures 1 and 2). 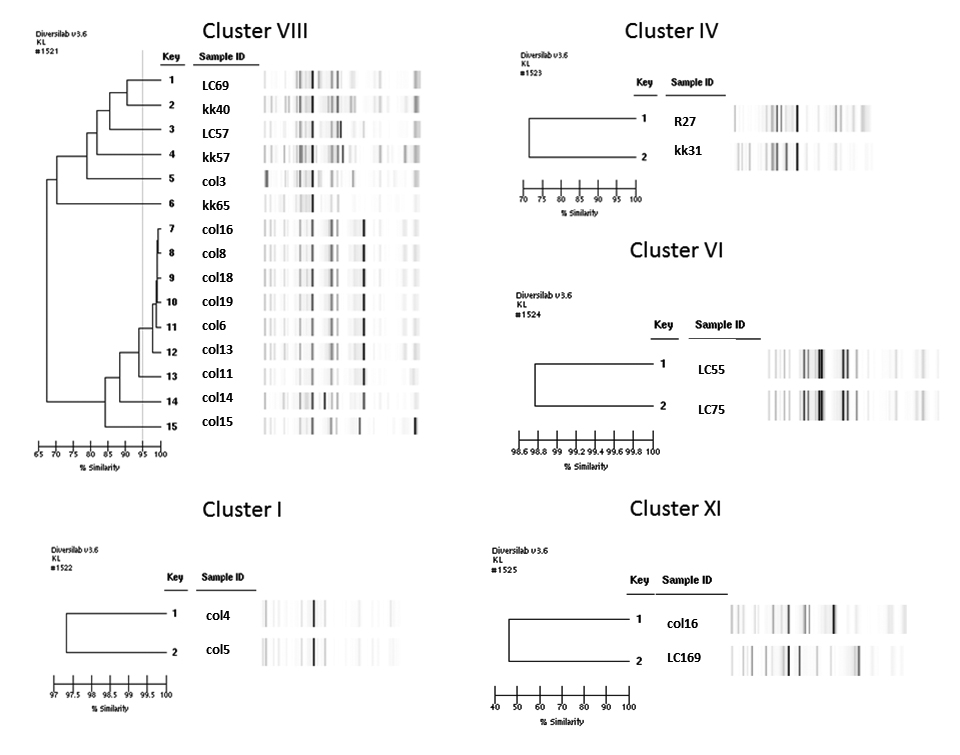 Figure 2. Phylogenetic tree by hsp60 sequencing with classification by clusters There is no difference in the number of groups achievable by any of the four typing modalities tested. This is likely due to low number of isolates on which all four methods were performed.

A pair of isolates classified in the same group by rep-PCR, rep PCPR with manual re-classification, or hsp60 sequencing has a probability of 0.45, 0.15, or 0.5 to remain in the same group when typed with MLST. Notice wide confidence intervals.

We conclude that the performance characteristics of rep-PCR make it suitable for epidemiological analyses such as outbreak investigations or determination of horizontal transmission in hospitals. We are also able to show that MLST provides finer classification than hsp60 sequencing while not being as discriminative as rep-PCR. Furthermore, the relatively low agreement between hsp60 sequencing and the other methods makes it less desirable for most applications, especially if used alone. Our findings indicate that rep-PCR may be a useful complement to other typing methods. These results allow clinicians and epidemiologist to evaluate outbreaks of Enterobacter cloacae complex, which is of importance as drug resistance is becoming increasingly problematic.

We thank Dr. Mary Hayden and Robert Weinstein for their thoughtful comments and guidance. We would also like to thank Dr. Xiaotian Xheng and the Ann & Robert H. Lurie Children’s Hospital of Chicago microbiology lab, and Pamela Hagen and the Rush microbiology laboratory for their contribution of isolates.